Eddie Brocklesby only started running at the age of 50, yet by 2015 at the age of 72, she became the oldest British woman to complete an Ironman Triathlon. We talk to Eddie about what made her start running and why she founded Silverfit to encourage more of us to become fitter as we age.

Q. You were 50 when you started running, what was the trigger?

I was living in Northamptonshire and I went to watch one of my husband’s colleagues take part in the Nottingham half marathon. When I came back home I said to my husband, I want to do something like that. At that point in my life I was a full time social worker and hadn’t done anything remotely like a half marathon. In fact I remember my husband saying that I wouldn’t be able to run as far as Northampton, (which was about two three miles away). That comment was significant; it was a challenge and I took it. I found a friend to train with, we started running together and that was the beginning. Twelve weeks later I was running my first half marathon.

Q. What took you to the next level? Half marathons are one thing but ironman races are in a different league.

My husband died not long after I completed the half marathon. I just kept on running and I was lucky to find a group of running friends in a small local running club who were extremely supportive. They helped me hugely at a time of grief. They were also very tolerant of my fitness level. They could get up the hill much faster than me but would always come back and then walk with me. When you are running in a small group you can talk to each other. That sort of friendship is really important, and they gave me their club place in the London Marathon

I loved that first London marathon and after that travelled to America to take part in several marathons there. I don’t really know what got me into triathlon. But I know I did have to learn to swim. Literally. When I started I could only swim the width of a pool and certainly not a full length. At 57 I booked my first triathlon.

Q. When you first started taking part in triathlons were you the only woman over 60?

When I moved to London I joined The Serpentine Running club. There were a few women my age but not many. There was however an advantage in being one of the few older women in the club. In those days I was able to tick the ‘age’ box which meant I could get a place more easily. When I first started running in races I was a rarity. For example I came in second in my age group (60 to 65) in the London Marathon in 2005, but now I guess I would be coming in at 100 in this age group. There are more older women running now which is great to see, but we need more.

Q. What is stopping women signing up to marathons and triathlons?

The big question that needs to be explored is ‘why’ is there a resistance for women? Why are women still in the minority in these sports? Yes, we need more role models, people we can look up to but there is also the menopause factor which until recently hasn’t been talked about enough. Current available research shows the importance of strength training, and we need to be doing this in our peri-menopause stage. We need more research to highlight this and to educate women about the importance of exercise much earlier in our lives. The more we understand the effect on peri-menopause and menopause on women, the more we will understand and design sport and fitness programmes as we age as women.

I came in second in my age group in the London
Marathon in 2005. There are more older women running now
which is great but we need more.
— Eddie Brocklesby

Q. Has your age ever held you back? What are the challenges that you have had to overcome?

Since I started training over 25 years ago, it has been a great upward curve of increased activity, longer distances and more events. However, the bad news is that over the last month or so, I have had to face a little bit more reality. (At this point it is important to add that Eddie has been cycling 250km a week). While I am incredibly fit I know I need to be doing more strength training. Strength is probably the most important fitness to focus on as you age. And although I have arthritis in my hips, because of my strength training I won’t need surgery. My consultant has told me categorically that it was and is my strength training which is preventing any surgery. I am encouraging all women to build strength training into their fitness routines.

Q. You start from nothing, before you know it a couple years later you are demolishing triathlons and inspiring people left, right and centre. You then started Silverfit, what was the idea behind starting it?

Working with the team at The Serpentine Running Club on a series of fundraising running events for the adoption agency I was working with, it became clear to me that the greatest difference I could make was by working with older people. We started off in Hyde Park doing Nordic walking and now offer everything from Pilates, Yoga, Walking Football, Badminton, indoor cycling, gym/ fitness classes, Bollywood dance and Silver Cheerleading. We are now currently in about 19 different venues with a very clear recipe that people meet up socially, do an activity and then they socialise again. And it is that social sandwich that is vital and the key to our success. We know from a lot of research that people keep coming because of the social element and because of the friendship. We also focus on fun. If people are enjoying what they are doing, if they are smiling and laughing, then they’re more likely to stay physically active. Fun is the key ingredient.

Q. Can you share one story that personifies the success for Silverfit?

We have one member who when she joined had quite serious health problems. She started Nordic walking, yet a year later she was running and completed the London Big half marathon for Silverfit. She had never dreamt about doing anything like this a year earlier. A huge achievement as she has just completed her fourth. It was so gratifying to see the change. But this is just one story among hundreds. I could give many examples of positive stories, such as the woman who started as a member but who then trained with us and is now leading groups of 20 people.

Q. If you could do anything to change how we age, what would it be?

We have to place a greater emphasis on physical activity. We must create solutions which people can enjoy, which are fun and where people can become more sociable. This is key to overcoming social isolation. We have to find ways to help people live not only healthier lives, but happier ones.

And this is where my own journey has inspired me. When I first started running back in London it was just meeting up with a couple of friends locally, and going out for a walk or a jog every Tuesday morning. It wasn’t so much the exercise as the commitment. I was going to meet friends, so I didn’t want to let them down. Would I have done it without that support? Having someone that you could exercise with, somebody that you know, or somebody that you don’t know initially, through Silverfit makes all the difference. It was through this friendship that I learned to push myself further.

Q. What would you say to the person at home reading this, saying that I could never do anything like Eddie?

I think we can all make a bit more effort to focus a little bit on a slightly healthier lifestyle without being intimidated by it. And start small. You never know where you will end up. At 60, I could only swim with my head above water, able to do five strokes. It is all about taking that first step, having fun and doing it with other people. 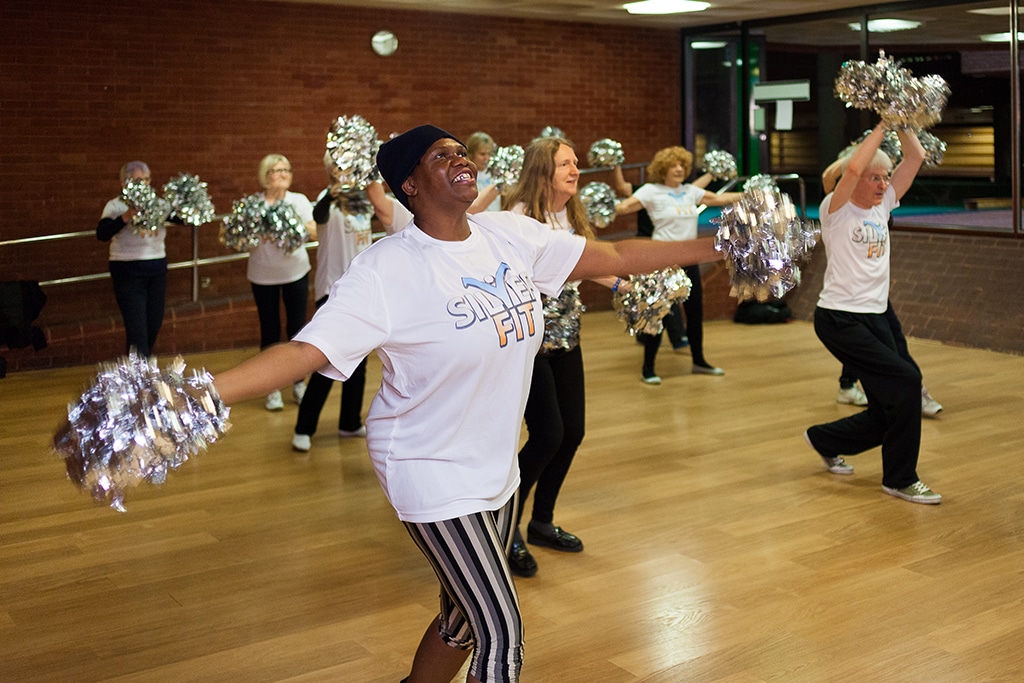 I think we can all make a bit more effort to focus on
a slightly healthier lifestyle. start small.
You never know where you will end up.
— Eddie Brocklesby

This means everyone should be able to find an activity to enjoy, regardless of ability or experience.

You can find out more here.