Living with my future self at 35

Living with my future self at 35

IT TAKES ON AVERAGE 7.6 YEARS TO BE DIAGNOSED WITH A CHRONIC ILLNESS AND COSTS $216 BILLION TO HEALTHCARE SYSTEMS GLOBALLY. HOW WELL INFORMED ARE YOU ABOUT CHRONIC ILLNESS BEFORE RETIREMENT AGE?

It started somewhere in my early twenties either following the stress of a traumatic accident; a bad bout of Salmonella in my mid teens or having a paintbrush continually in my hand since 5-years old, honing my way to Trompe L’Oeil perfection. Either way, this perplexing set of symptoms kept flaring sporadically and at varying times in the year and across varying fingers. Cut to 13 years later; more visits to the GP and subsequently Rheumatologist than one would even think possible before the age of retirement after a ‘well lived life’, and I was finally diagnosed with Palindromic Rheumatism.

Palin-what now? Oh, it’s no big deal, just some sporadic joint flare ups at random points in the year and things go back to normal just as they were to begin, in between. The magic of palindromes. There’s no joint erosion and my Anti-CCP marker is negative, so I’m the lucky one right?

“Palindromic rheumatism affects men and women equally, typically between the ages of 20 and 50” BEFORE I RETIRE? What is this nonsense? And the pièce de résistance: “we have no idea what causes it and it’s relatively unknown to most medical professionals”. Cool.

“Chronic disease is not exclusive to the over 55’s, triggered with the first pension instalment or as a supplement to the bus pass.”

Somewhere between the months of December and April every year Benjamin Button takes over and I am akin to an older person. Experiencing debilitating symptoms sporadically without warning, ebbing and flowing for 4-5 months of the year where my body decides to attack itself and I get a glimpse into the life of a potential future self. Or at least one that might stereotypically be experienced by those of later life.

I always thought I was just hyper mobile, ballet from 2yrs old and my party trick of bending my arm round in bizarre ways. I still snap, crackle and pop everytime I get up off the floor after someone has told me “but you’re too young for that”. No my dear, you are stuck in an old mindset.

Systematic eliminations have been a regular part of my life for around 10 years, pre and post diagnosis. Every food, exercise move, interaction or climate I found myself in, I would analyse at a granular level to see if that had sent my immune system into overdrive, mistakenly attacking itself. Perhaps it was a combination of some or all of these things. The exhaustion that caused in itself was quite telling that stress and becoming off-kilter can play a huge factor in perpetuating any illness.

Chronic disease (or ‘dis-ease’ some say) is that niggle at the back of your mind: every sip, bite or wintery damp rainy day wondering if this might trigger a flare up. An attack often occurs sporadically without any obvious triggers or warning symptoms. Talk about living life both on the edge and in the fast lane.

Chronic disease is not exclusive to the over 55’s, triggered with the first pension instalment or as a supplement to the bus pass. It does not discriminate on age and sure as hell will not stop me living a joyful and healthy, purposeful life. I still have my cake and eat it, I have just patiently learnt to tweak the ingredients.

On average, it takes 7.6 years to be diagnosed with a long-term condition (meaning one that cannot be cured but is controlled by medication and/or other treatment/therapies1) (Department of Health. 2012. Long Term Conditions Compendium of Information: Third Edition p.3) and musculoskeletal problems affect surprisingly more age groups than what is currently represented by imagery and language associated with ‘getting older’. Indeed, whilst the majority of long-term conditions increase in prevalence as age increases, Asthma is perhaps a more familiar disease to all, and another example that is notably consistent at 4-5% regardless of age.

So where is the threshold between ‘young’ and ‘old’? Do I need to start counting in dog years? Or does society need to discard the numerical age when projecting images, using language or contemplating what it means to have experienced a ‘well lived life’? 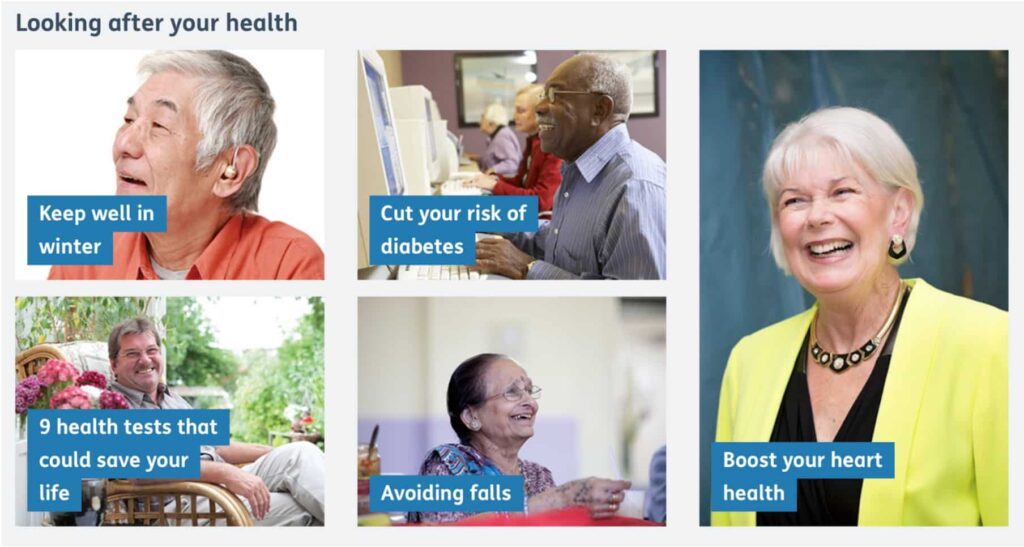 My perception of ‘anti-ageing’ is also different to the mainstream gloss. Less botox and filters, more pure omega 3 and compression gloves – feeling the sense of renewal when the flare has eased. Altered perceptions of wisdom also have me being my own advocate in challenging healthcare and social settings when you feel others don’t understand you are suffering if no symptoms are visible, glaring out at them. Or maybe, it’s just all in your head? as so many have told me.

I have a choice – to opt for compassion for myself and others; or frustration and later stress that I am living with something incurable. Seeking reasons to remain hopeful whilst mourning the life pre-diagnosis, in order to create the space for something new.

Chronic illness can also come with chronic pain. Much of which is showing an increase in ages 16-34. In a recent Guardian article, Ellen Miller, Versus Arthritis’ former acting Chief Executive said, “Life experiences such as deprivation, social exclusion and being in a marginalised group often strongly influenced whether someone suffered serious pain for a prolonged period”. Clearly there are many layers to this issue beyond the topic of this article, but if “one interpretation of ageing is a physiological one” (Colum Lowe, Director DAI) and the prevalence of chronic conditions (including pain) are only increasing in younger age groups, then we need better healthcare systems to support people throughout the course of one’s life. In turn, societal and community awareness of “old age problems” I believe would shift and improve dramatically.

“The two key factors for developing a LTC are lifestyle and ageing. Prevention, delaying onset and slowing progression of long term conditions can happen through improved public health, messaging/targeting personalised care planning, information and supported self care. It is important that the wider population is supported to take more responsibility for its own health”

I eat well, I am of a good weight for my height, exercise regularly, meditate, practice yoga, try to have a glass half-full disposition and have blood work that suggests a well functioning system. So why do I get searing pain and swelling in my fingers mostly and brain fog that resembles… you know, that thing… I’m unsure just how much more I can do to adjust my lifestyle and perhaps my chromosomes that evidently got exposed to kryptonite at some point since 1987.

“Chronic disease is that niggle at the back of your mind: every sip, bite or wintery damp rainy day wondering if this might trigger a flare up. An attack often occurs sporadically without any obvious triggers or warning symptoms. Talk about living life both on the edge and in the fast lane.”

My current solution to this annual upheaval is through diet, humour and compression gloves. Drugs are not without their side effects and fortunately the degree of my condition for the time being does not warrant the milligram intensity, so I opt for the holistic approach and adapt to my surroundings mindfully. Interestingly, my pain threshold has changed, which can be complex and difficult to remember when to pull back and not over do it and potentially trigger a flare up.

So how do I live my life? Joyfully mostly, sharing memes, not letting the fatigue lead cape make me feel any less superhero, learning to manage symptoms and potential triggers with a graceful acceptance, and lastly knowing this could just happen to anyone regardless of their numerical age.

She started her career as a conceptual artist and painter, later pursuing interior design and education. Her predominant creative interest is in inclusive design, gender stereotypes and creative rebellion.