“For a trapeze artist to grab the next bar, she has to let go of the last one”

— Gail Blanke, author “Between Trapezes: Flying Into a New Life with the Greatest of Ease” 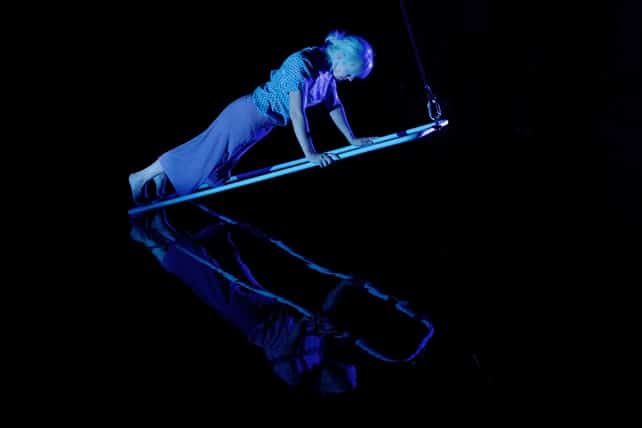 If there is one thing we can rely on as we grow older, it is that life will invariably trip us just when we think we know what we are doing, where we are going and even who we are.  Sometimes these are moments of catastrophe which, afterwards, will always feel like the point at which our lives took a distinct and very precise new turn. Photographer and yoga teacher Lee Carter experienced such a moment, a catastrophe which prompted her to let go of one way of life and grab hold of a new one. One in which she learned how to literally fly through the air and let go. I spoke to Lee to find out how it felt to run away to the circus as an older adult.

“I’m 63, not everyone would want to live like me. In my twenties I just assumed I would have a partner, a house, children, dogs etc and somehow it just didn’t happen like that.” 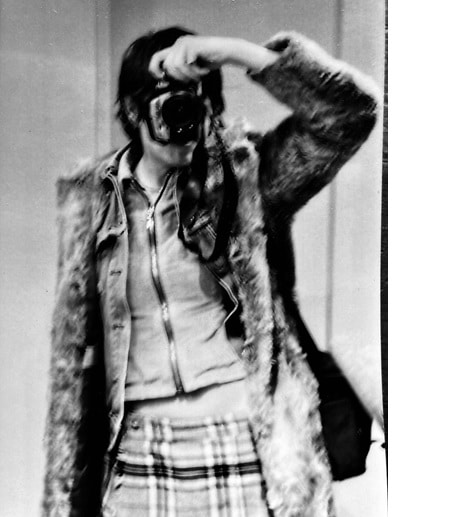 I was a photographer for most of my life and when I turned 49 I unexpectedly conceived. It came as a complete shock and not at all in my life plan.  Also quite unexpectedly,  I chose to accept my new role, I knew there was a high probability of complications but I just strongly felt that, if  I was meant to be the mother of this little boy then I would embrace that responsibility, and whatever  came with it.  Nine months later my son was stillborn. My life once again was thrown into the unknown  with no guideline of how to move on except to continue following my instincts. One thing I felt very clearly was to lose a child your life does not carry on as before, something changes deeply.

Years before, I had been taken to see a show performed by students at the physical theatre school LISPA (a Lecoq style training) I felt very inspired and excited by what I saw, I had not come across that style of performance or storytelling before. At that time I was a photographer and a yoga teacher and had never considered doing anything else.

Pictured: Lee spent most of her life as a professional photographer

Fast-forward 10 years, having just lost my son, I randomly came across some students from LISPA and the memory of the night I had seen the show came flooding back. They told me there was a week-long open workshop about to happen and I signed up for it immediately, having zero experience in any kind of performing. I was always the one behind the camera, not in front! That week turned into a two year training in physical theatre, despite being twice the age of my fellow students and also to the bafflement of friends and family. I just knew there was something for me in this new world and I needed to find out.”

Losing her son, whom she named Louis, was only half the story because in an unexpected twist of fate her best friend had also become pregnant at the very same time. The two women were both in India to teach a yoga retreat when they discovered they were pregnant, they even did their pregnancy tests together.

“Bea was 38 and had always wanted to be a mother, whereas I was 49 and never had that yearning for children. Life is so much stranger than fiction. I had the whole journey with my son, and a week later I spoke to Bea. She was really worried but I reassured her, she was young and fit – everything would be fine. Then Bea died from an embolism about an hour after giving birth to her son.”

“The idea and experience of performing was utterly terrifying but I wanted to face that fear and I knew I had a story I somehow wanted to share some day, somehow.”

As  Lee recognises , this was such a weird and tragic period of her life, her mind couldn’t make any sense of it, even now it seems, to her, quite unbelievable. I wondered whether her interest in learning this form of physically demanding theatre at the age of 50, was a kind of subconscious pull towards healing.

“I didn’t think of it as therapy but it was really good to just get into this physical space. I understood very quickly with the practice of physical theatre  you can travel around the world and experience all kinds of  emotional dramas within the safety of a controlled, creative space.   So I spent 2 years experiencing life in a big black rehearsal room.  The idea and experience of performing was utterly terrifying but I wanted to face that fear and I knew I had a story I somehow wanted to share some day, somehow.” 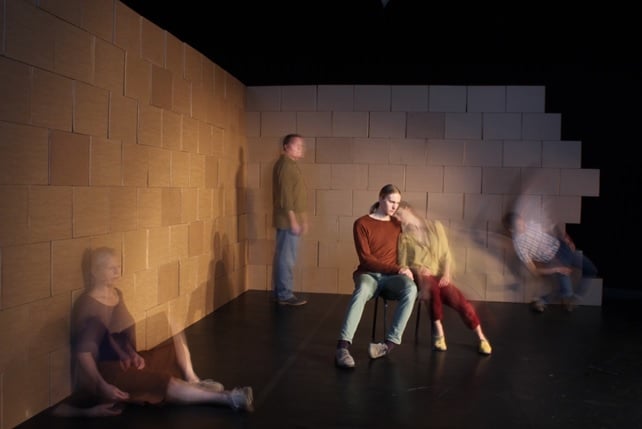 When the theatre course ended she was invited to audition for a dance company who were looking for an older performer. Lee went on to work with Tilted Productions for five years. The piece they ended up performing was called Belongings.

“It was about families and involved lots of boxes symbolising the packing and unpacking of memories in our lives, and also the movement of displaced people. The piece was site specific and  involved  the community and taking the audience on a physical journey. It  was a really beautiful piece of work. and my first experience of being part of a company, I was learning to move, to be a dancer, and it was all totally new to me.” 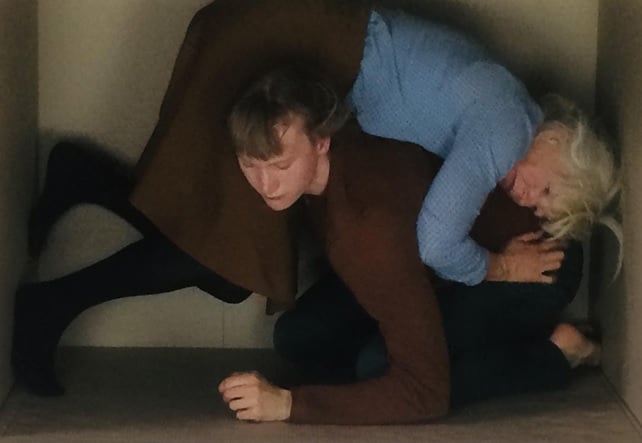 Shortly after Belongings ended Lee was invited to audition for a circus company called Ockham’s Razor.

“They didn’t know anything about me and they decided to do story telling and asked if I had any stories to tell. And I said ‘Oh yeh!’ So, that story (about my son) came out on stage and became quite an integral part of the piece. I see that as my personal journey rather than a journey of me being old. I had this seed of an idea which found it’s platform in a circus company, but it’s funny because if I hadn’t been over 50 I obviously wouldn’t have got any of those jobs .” 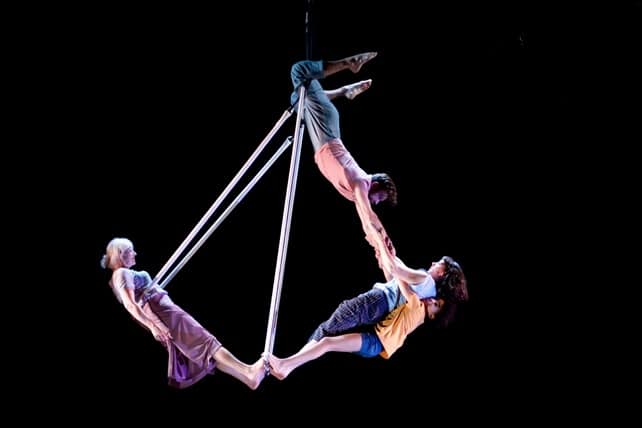 I had to learn some circus skills like how to stand on someone’s shoulders and trapeze. I was taught traditional things but they (Ockham’s Razor) use them in a non traditional way. They are constantly shifting boundaries and experimenting. They are based in London and they perform everywhere. We went to France, Germany, Brussels. We spent a month at the Edinburgh Festival. Meeting the audience afterwards was always really rewarding, often people would say thank you ‘ I had a miscarriage’ or ‘ I lost my child.’ That was very satisfying, I felt like I had served a purpose. I felt like I had shared something. Sharing of an experience and somehow inspiring people because I survived.”

Sharing her story on stage was only part of what made the process so fulfilling for Lee. 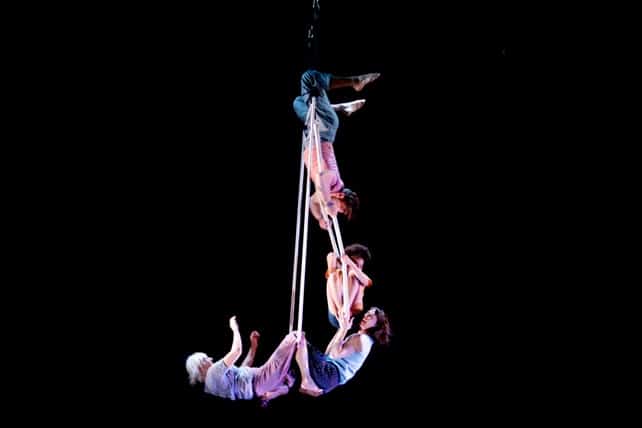 “I loved being in a company. Really loved that creative space with people. I loved being challenged and learning new things. The performance side was really interesting for me – because it literally felt like I am going to die. And because I had studied and practised yoga for 20 years I was really interested in that feeling. Like what is this feeling, that adrenaline that you get when you’re about to go on stage and then you overcome and you do that thing. It’s an experience of being so present in your life – I am really in it – present in that moment and overcoming fear – the fear of performance, of being in front of an audience. It’s to do with fear.” 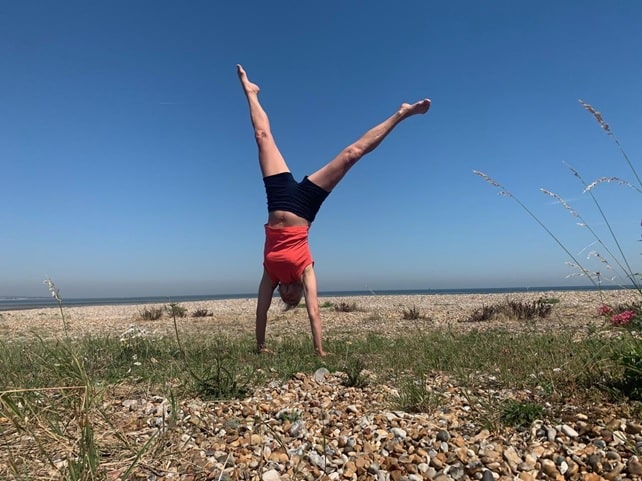 Now at 63 Lee is bringing her skills together and exploring the field of movement directing.  Last year a theatre director asked her to work with his actors’ physicality on stage, she discovered that she loved it. Now Lee is set to continue that role with Amici, a theatre company who work with able bodied and disabled bodied artists and performers. More than anything, I get the impression she is genuinely happy to see where her so-far extraordinary life will take her:

“I continue to try to follow and trust in my instincts , sometimes in life they really take charge and you’ve just got to go there . Yoga really taught me about…surrender – there are moments in your life when you’re just in it – the massive surrender – you just have to let go. (And) I think my yoga training gave me a basis to go  ‘Okay – all the things I thought I needed in life – I am just dropping all of that. I feel very lucky to have a lot of play, laughter, creativity and collaboration in my life. These are the things that fill me with joy and satisfaction, long may it last!”

If you’d like to find out more about the work that the Amici Dance Company do, go to  https://www.amicidance.org/about/amici-dance-theatre-company

OCKHAM’S RAZOR is an aerial theatre company who combine circus and visual theatre to make work that is arresting and entertaining.

If you’ve been affected by the death of a baby, Sands is a charity that provides support and care for as long as is needed.

If you would like to get in touch with Lee, she can be contacted via email Leecarterimages@gmail.com